College places for home educated 14-16s in England are free. Home educated young people aged 14-16 in England are able to attend college part-time or full-time and the Government (Education Funding Agency) will pay for the course. It is up to the colleges whether or not to admit under-16s. These students can do any course agreed by the college, not just a designated 14-16 course, although many colleges still don't offer GCSE courses. The rules are different for home educated young people because the parent retains responsibility and so the college does not have to make special arrangements for pastoral care or offer a full curriculum. DfE says arrangements are between the parents and the college and do not need to involve the local authority at all." 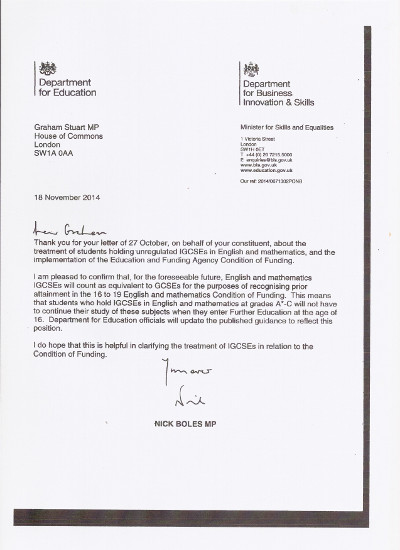 The new 16+ funding arrangements mean that students must study mathematics and English if they haven't achieve a GCSE grade C or equivalent in these subjects by the age of 16.

This could potentially have caused a problem for home educated students who are generally not able to take GCSE English because of the issue of controlled assessments and there was some confusion over whether 'unregulated' IGCSEs (ie not 'Certificate IGCSEs') counted as equivalent.

We are pleased to report that the Department for Education has now recognised that the IGCSEs taken by home educators will count as equivalent "for the foreseeable future." Please see the letter from the Minister for Skills and Equalities which can also be seen as a larger jpg here or downloaded as a pdf here

In September 2014 the Department for Education said that IGCSE English will count as equivalent until 2018. Please see the letter from the Secretary of State Nicky Morgan which can be viewed as jpg here or downloaded as a pdf here

For academic year 2016 to 2017 allocations only, a 5% tolerance will be applied. Funding reductions will therefore only apply to institutions where more than 5% of students (by value) without A*-C GCSE in English and/or maths did not enrol on an approved qualification in these subjects. Funding for these institutions will be removed for each student above the tolerance level at half the national funding rate, rather than 100% as originally planned. Details can be found on GOV.UK. As previously announced the condition of funding is revised from the current academic year 2015 to 2016. To meet the condition all full-time students starting their study programme who have a grade D GCSE or equivalent in maths and/or English must be enrolled on a GCSE or approved IGCSE qualification in maths and/or English. EFA Letter January 2016 via this page

There are five funding bands which are explained in this useful video from the EFA. From 2016 students are funded depending on the number of planned hours, as set out in the Funding Rates and Funding Guidance/Regulations

EBacc compulsory GCSE subjects in schools, DfE press notice June 16th 2015: 'pupils starting secondary school this September must study the key English Baccalaureate (EBacc) subjects of English, maths, science, history or geography, and a language at GCSE' ALTHOUGH 'The government recognises the EBacc will not be appropriate for a small minority of pupils and so we will work to understand this and be clear with schools what we expect for this minority of pupils. The detail will be set out in the autumn and there will be a full public consultation on these proposals.'

The Wolf Report on Vocational Learning in England was published in March 2011.

This article is http://edyourself.org/articles/WolfReport.php. The following links to other websites are contained in the article, displayed as citations to aid you in printing the document.