Statistics Educated Other Than At School With Statement or EHC Plan 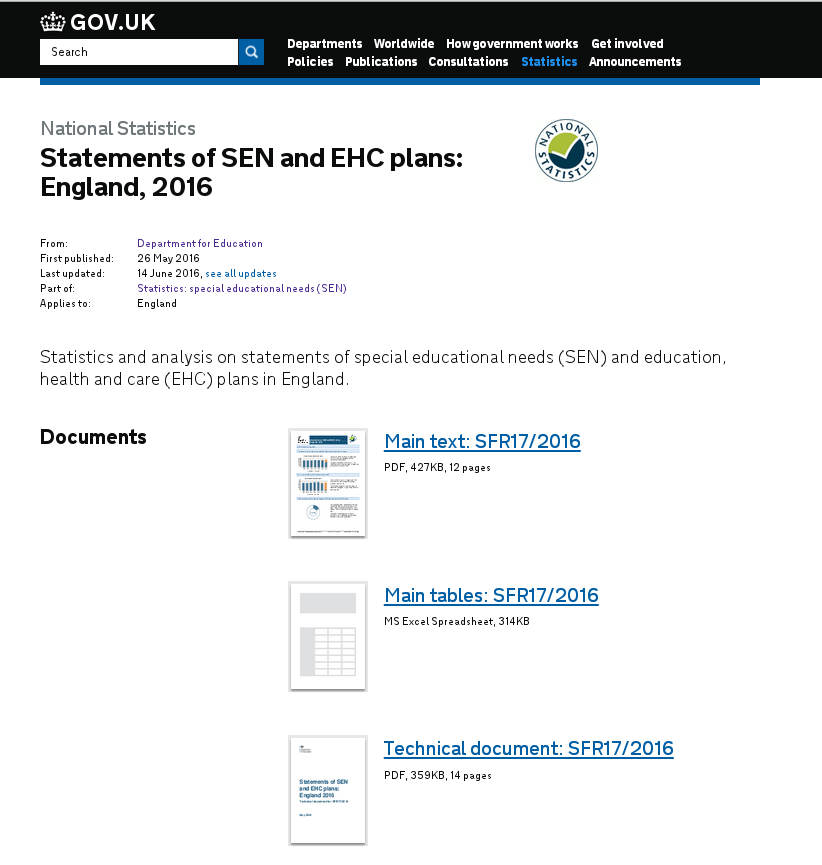 At the end of May 2016 the Department for Education published new statistics on the prevalence and distribution of statements and Education Health and Care Plans for children with special educational needs and disabilities (SEND). This 'Statistical First Release' (SFR) is based on local authority SEN2 returns

The system for special needs changed in September 2014. Both systems are currently running in tandem with existing statements of SEN gradually being transferred over to the new EHC Plans. The current deadline for all statements to be transferred is April 2018.

Since this is a home education website, I have focused on those SEND statistics relating to children educated outside school, although I am also interested in what happens when statements are meant to be transferred to EHCPs.

Unrelated to placement, in some LAs more statements are ceased than transferred to EHCPs which does not bode well for all the home educated children whose statements have yet to be transferred.

Definition Educated Other Than At School

Across England in January 2016 there were 256,315 children with statement of special educational needs or an Education Health and Care Plan. Around 2% of these children are "educated other than at school.

"Educated other than at school" includes children who have been permanently excluded and also those who are awaiting provision, as well as home educated children and children subject to "other arrangements made by the Local Authority".

Looking at the distribution between statements and Plans, 4 out of 10 children awaiting provision had Plans already, 1 in 3 of children educated via other arrangements by the LA had Plans, but 4 out of 5 home educated children still had statements.

Explanation Other Arrangements Made By The Local Authority

"Other arrangements made by the Local Authority" is a bit of a catch-all for children who don't fit neatly into the other boxes. It DOESN'T include children in hospital schools or pupil referral units who are recorded separately elsewhere.

As explained in the footnote to Table 1, Technical Document page 9 and the SEN2 Guidance "other arrangements made by the Local Authority" may refer to a small number in further education college, sixth form college or specialist post 16 institutions (although most of these will be recorded separately); awaiting provision; in secure units or young offender institutions; in centres run by social services; in prison; not in employment, education or training (NEET). "Other arrangements made by the Local Authority" also covers situations where the LA funds home-based education as described here. 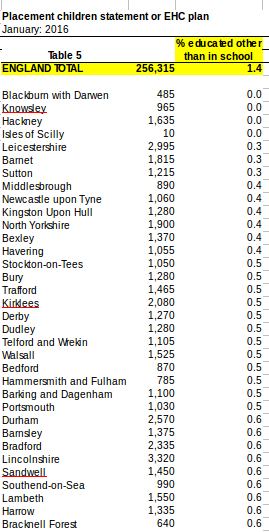 Table 5 provides local authority level combined data for children educated out of school. The SEND Statistics do NOT reveal how many children with a statement or Plan in each LA are home educated (although see my Freedom of Information responses here)

However, some LAs such as Hertfordshire and Suffolk have much higher numbers of children with statements or Plans educated outside school. The most likely explanation is that the majority are awaiting provision.

Table 2 records that at the beginning of 2016 there were 790 children educated outside school with a new EHCP or statement made during 2015.

The law on special needs changed in September 2014. All new arrangements begun after this date would be for EHC Plans, therefore the only new statements made in 2015 would be where a statement was finalised in 2015 after there had been an ongoing dispute regarding the statement at the time the law changed.

The number of children educated outside school with a new statement (or Plan) has remained relatively constant, until the rise in 2015, which is down to an increase in those awaiting provision, combined with "other arrangements made by the LA."

In a quarter of LAs there were no children or young people educated out of school with a NEW Plan (or statement) last year.

A few LAs had high numbers of children out of school with a new EHCP (or statement). Judging by the national figures, most of these are probably awaiting provision, followed by the catch-all of "other arrangements made by the LA." [Table 6] 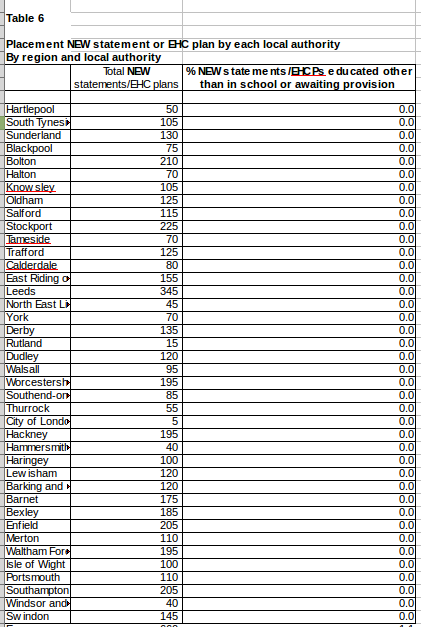 While other tables in the Government's SEND statistics only have combined Educated Outside School figures, we DO have specific information at local authority level about new home education with a statement or Plan, since this is recorded as a change of placement. (January 2015 here) 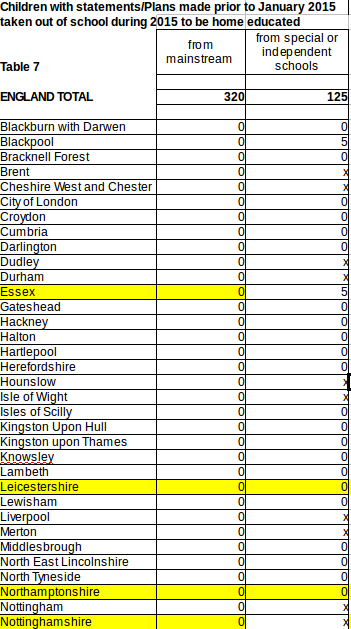 Table 7 provides a breakdown by local authority of the national statistics in Table 2 related to children with special needs being removed from school by parents.

Three quarters of LAs had fewer than 5 children with a statement or Plan being taken out of school for home education during 2015.

Over a quarter of LAs had no children with a statement or Plan taken out of mainstream school for home education during 2015.

These included some authorities with a high population such as Essex, Nottinghamshire, Northamptonshire, and Leicestershire.

In contrast, a few local authorities did have high numbers of children with a statement or Plan coming out of school for home education. 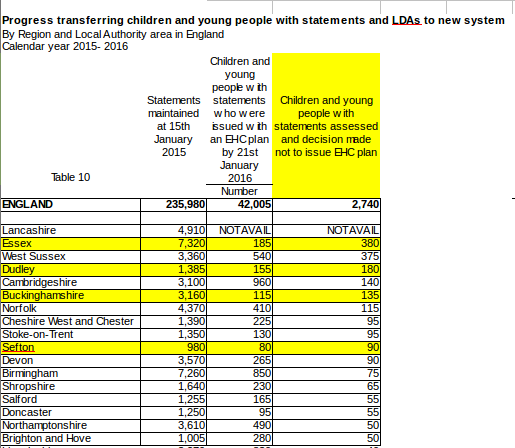 The Government has said that nobody should lose an existing statement just because the system has changed.

It is striking that in some local authority areas, more statements have been ceased at the point of transfer than have been successfully transferred to EHCPs. [Table 10] (Working out details here)

"No child or young person should lose their statement and not have it replaced with an EHC plan simply because the system is changing. Equally, I expect that young people who are currently receiving support as a result of a LDA and remain in further education or training during the transition period, who request and need an EHC plan, will be issued with one. If a council decides to cease a statement and not replace it with an EHC plan or not issue an EHC plan to a young person who receives support as a result of an LDA then dispute resolution arrangements must be in place locally for parents and young people, including mediation and the right to appeal a decision to the SEND Tribunal.
Minister Edward Timpson September 2014

Parents said they hoped the new Plans would be better than statements ("hopefully more detailed description of what support offers"   "I would like them to pay for my son's dyslexic support and some independence training"   "we want a personal budget") although there was widespread cynicism and pessimism ("I think I will be lucky to hang on to what we have got"   "as always I am hoping for less costly support but more parental control ..... ha ha ha ha ha ha ha!"   "I'm in the dark and think it's just another useless form but I could be wrong"   "I found no one at the council willing to offer anything much in the way of support or to even acknowledge problems that were clear to everybody else, and I expect even less in the future due to the current climate of service cuts" Survey link here

This article is http://edyourself.org/articles/sendstats.php. The following links to other websites are contained in the article, displayed as citations to aid you in printing the document.