The Welsh Government published new home education guidance for local authorities on January 9th 2017. See this page. The guidance is non-statutory since there is no provision in law for the Government to issue statutory guidance on home education.

In early 2016 the Welsh Government said that publication was being delayed because of waiting on the child practice review into the death of Dylan Seabridge. When the Assembly discussed the Dylan Seabridge case the Minister indicated that the new Social Services and Wellbeing (Wales) Act 2014 would strengthen and reform safeguarding services.

Home educated Dylan Seabridge died age 8 in December 2011. The cause of death was later found to be scurvy. In 2009 Dylan's mother, who had been off work sick for 3 years, was dismissed from work on ill health grounds and the family took the case to an employment tribunal. Her employer was Ceredigion council. The BBC reported that during this tribunal it became apparent to the council that Mrs Seabridge was suffering severe mental ill-health and concerns were raised with social services who decided it wasn't necessary to refer this to the neighbouring council where the family lived. More

The review finally appeared in July 2016. The author noted the newly implemented Social Services and Well-being (Wales) Act which she said "advocates for a much more integrated partnership approach." Link.

The first thing which leaps out of the new guidance is the flowchart. The left hand side of the flowchart sets out a process whereby if the family opts NOT to meet the LA, no further action should be taken unless there are specific concern about welfare or education. In terms of ongoing contact, the guidance says LAs should seek a meeting or request a written update, and if and when a meeting does taken place the guidance says the LA "may wish to ask families to see specific examples of learning". There is no longer a reference to "observing education in the home" which appeared in an earlier draft. 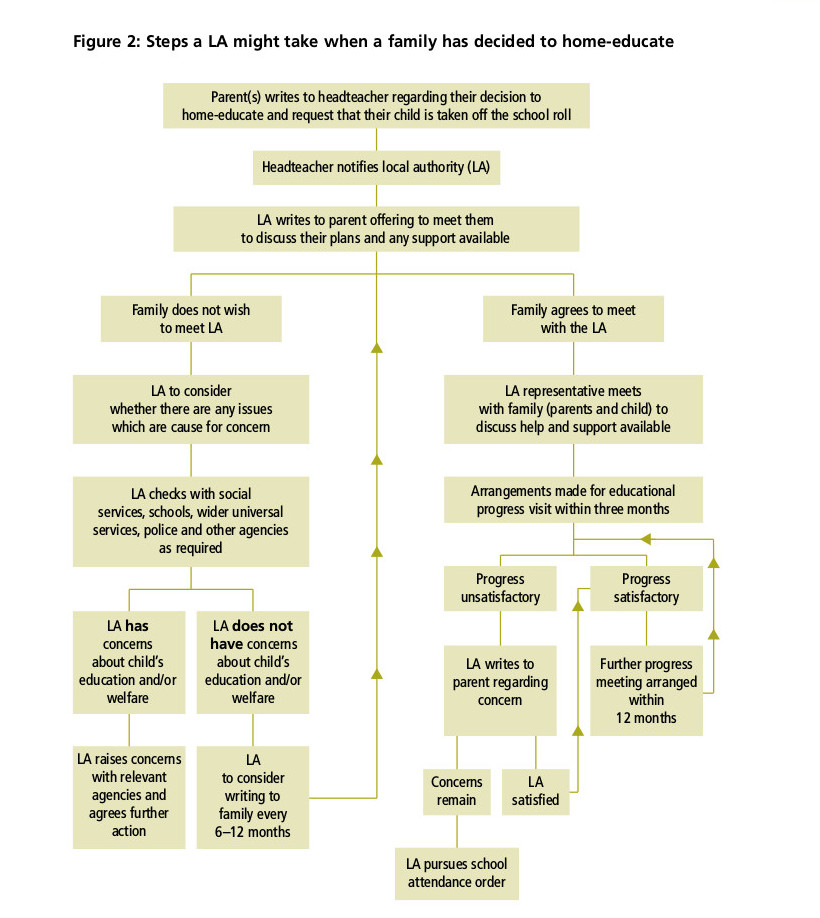 This article is http://edyourself.org/articles/eheguidance2017wales.php. The following links to other websites are contained in the article, displayed as citations to aid you in printing the document.