Nearly a quarter of pupils in alternative provision/pupil referral units are taught in grade 3 or 4 settings https://cfey.org/2019/11/big-questions-over-the-quality-of-alternative-provision/

Data published April 12th 2019: Ofsted has investigated 521 settings, and inspected 259 since January 2016. "Ofsted estimates that as many as 6,000 children are being educated in the unregistered settings it has inspected to date.Alternative provision is the most common type of setting (28%). Around a quarter (26%) of the settings are general education providers, and a fifth (21%) are places of religious instruction." Read more here

Ofsted has been looking at alternative provision which is where a pupil goes off-site as part of their regular timetable, and the activity is not led by school staff. Ofsted says "schools can use such provision to try to prevent exclusions, or to re-engage pupils in their education." The latest findings were published on February 9th 2016 and the material on this page is derived from the Ofsted report. Positive example provided by Ofsted here (6 minute film)

Alternative provision remains a largely uninspected and unregulated sector. There is no requirement for the majority of alternative providers to register with any official body and no formal arrangements to evaluate their quality.

Alternative providers that offer only part-time education and those that provide full-time education to very small numbers of pupils do not have to be registered. Ofsted says "this remains a concern and means that pupils can spend all or the majority of their week at a placement that receives no external inspection or regulation."

Ofsted has been lobbying the Department for Education since 2011 to extend registration and inspection to any AP setting providing more than one day’s education a week. 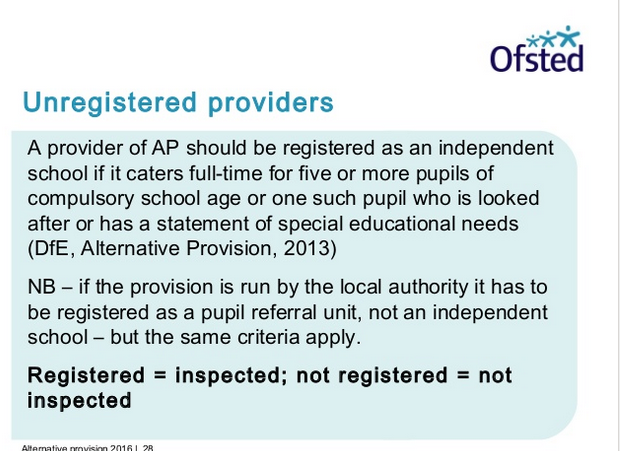 In the small number of pupil referral units visited by Ofsted, 60% of pupils spent at least some of their week attending an alternative off-site placement. This is a much higher proportion than in mainstream schools and also higher than the figure of 50% that was reported in 2011.

Alternative providers may be part of a chain or a very small one-off establishments, and can be public, voluntary or private sector. In one area the local authority may take responsibility for commissioning and placement while in other areas schools might work in isolation to find and commission their own provision. Ofsted also found groups of schools working together. Some providers have a very specific focus, while others teach many of the subjects found in any school curriculum.

Schools are responsible for ensuring the quality of the placements to which they send their pupils but there is no specific reference to off-site alternative provision in the government’s latest guidance on safeguarding in education updated September 2016.

Ofsted is asking the Government to issue clear guidance to schools about checking the safety and suitability of staff working in unregistered alternative provision, saying that schools sometimes delegated too much responsibility for their pupils to another organisation without ensuring that their own standards were met.

Ofsted has found some schools placing pupils at an off-site provider without having visited first to check its safety and suitability. Some schools also don't check for themselves that the relevant safety standards are met and are too ready to trust verbal assurances from providers or too reliant on outdated lists compiled some time ago by local authorities.

In off-site provision pupils may be working in industrial settings with unfamiliar processes and equipment governed by specific safety standards. In some cases schools don't accompany pupils on their first visit. Pupils may also have to find their own way to placements and in some cases travel long distances by public transport.

Pupils attending alternative provision sometimes spend time with a number of adults, usually employees of the placement but also members of the public, which has the potential to make them vulnerable, including through the inappropriate use of technology. Only 7% (33) of the providers had had any information or discussion with schools and of these, only one provider had received any clear written information.

A small number of providers felt that they had encountered serious issues in relation to social media, for example they were concerned about cyberbullying occurring, and were occasionally alert to possible grooming taking place. Laptops used at alternative placements did not always have appropriate firewalls or filters to try to prevent pupils accessing inappropriate material.The majority of providers had not undergone any formal child protection training.

Ofsted found that alternative providers were often not well informed enough about aspects such as child protection, the use of social media by pupils and general e-safety. The majority of provider staff had not attended any formal child protection training.

Ofsted wants the Government to revise the threshold for providers to register as independent schools, and to allow Ofsted direct access to all alternative providers that take pupils of compulsory school age for six hours or more.

The Government recently asked whether private providers of alternative provision catering exclusively for children who have been referred to them by local authorities and/or schools should be exempt from the requirement to register. My comment was that this assumed LAs only used AP providers whom they have checked in some way, and I asked whether this belief was well-founded.

According to Ofsted, some local authorities do have a list of providers but have played no part in checking the suitability or quality of those included. A few schools reported that the local authority had had a database of provision in the past, but that this had ceased. It was usually reported that this was because the local authority no longer had the resources to carry out the appropriate checks. Occasionally, databases of provision remained available, but schools were aware that the information was not up to date so had stopped using them.

A provider only has to be registered as an independent school if it caters full-time for five or more pupils of compulsory school age; or one pupil who is looked after or has a statement of special educational needs.

Schools don't necessarily look at the bigger picture; where schools only send only one pupil themselves or only sending pupils part time, they fail to check how many pupils from other schools are also attending the provider and on what basis. Schools assume that the provider will have registered if it needs to. Currently there are no sanctions for schools using illegal alternative provision.

Ofsted has apparently referred 17 providers to the DfE following survey visits, 14 of which the DfE judged should have been registered as independent schools or pupil referral units. These have all since closed or registered.

A further concern for Ofsted was that some pupils whose alternative provision placements were theoretically ‘full time’ were not actually receiving a full-time education. This comes under the category of "children missing out on education" which Ofsted reports on when it looks at local authority safeguarding arrangements.

Ofsted found a few schools were placing pupils in alternative provision for most of the week but not then having them back at school for the rest of the time. This is likely to contravene government guidance about the use of part-time timetables and pupils’ entitlement to a full-time education and constitutes a potential safeguarding issue.

Pupils who attended alternative provision full time sometimes studied a very narrow range of subjects, and the English and mathematics qualifications they were enabled to take were only at a very low level. In 7% of the schools visited (11 schools), pupils missed lessons and no formal catch-up mechanisms were set in place, or it was the responsibility of the pupil to ensure that they kept up.

Not all schools that commissioned full-time provision checked adequately on the quality of the curriculum on offer. In six of the schools visited where most or all pupils who attended alternative provision did so full time, inspectors found key shortcomings. In one case, some pupils studied little or no English and mathematics. Here, they spent too little time in timetabled learning activities as the provider mainly offered the social activities of a youth club.

In 2011, 7% of Y9-11s (14-16 year olds) in the schools surveyed by Ofsted were going to alternative provision at least once a week. Three years later this had gone down to 4%. Just over 10% of these pupils had special educational needs. However, although the total number of pupils in AP is going down, pupils who do go to AP are spending an increasing amount of time there.

The numbers of pupils involved and the length of time they spent off site varied considerably from school to school. One secondary school with 426 places in Years 9 to 11 had 98 pupils attending alternative provision, the majority for one day each week, but most schools used AP much less.

Over the three years of the survey, there was an increase in the amount spent by schools on alternative provision. In the first year of the survey, the total cost of alternative provision used by 58 schools in the previous academic year (2011/12) was almost £2.4 million. A sharp increase in the total amount spent was then seen for 2012/13 to about £3.5 million (57 schools), rising still further to just over £3.9 million for 2013/14 (40 schools).

Average spend per pupil in 2014-15 was £3,217. Schools visited had spent on average around £54,000 on alternative provision during the year prior to the survey inspection with amounts ranging from £1,000 to £280,000 depending on the number of pupils involved. Most schools reported a reduction in the average amount spent per pupil currently taking part in alternative provision compared with the average amount spent in the previous academic year.

This article is http://edyourself.org/articles/ofstedaltprov.php. The following links to other websites are contained in the article, displayed as citations to aid you in printing the document.